The Demag-S stationary demagnetizing machine is the latest product of Holding in 2020. It is designed to solve the demagnetizing problem for heavy, large, and long workpieces which are difficult to be moved on the conventional demagnetizers.

*E* Equipped with a Tesla meter. Can confirm the demagnetization effect immediately.

Why do we need Demag-S ?

In addition, for large and long workpieces, the whole workpiece can not pass the demagnetization field at the same time. Therefore, the magnetic domains that have been disturbed by the demagnetizer can be magnetized again because of the other parts that have not been demagnetized.

The patented Demag-S uses a special power modulation circuit to generate a low-frequency and gradual alternating magnetic field, which emulates the effect of the conventional demagnetizer. Its technical characteristics are as follows:

Simulate the alternating magnetic field that gradually decays as the workpiece moves away during traditional demagnetization.

In addition, the static demagnetizer can also reduce the frequency of magnetic field alternating and enhance the penetrating capability of the demagnetizing field. Solid and heavy workpieces can also be demagnetized thoroughly. 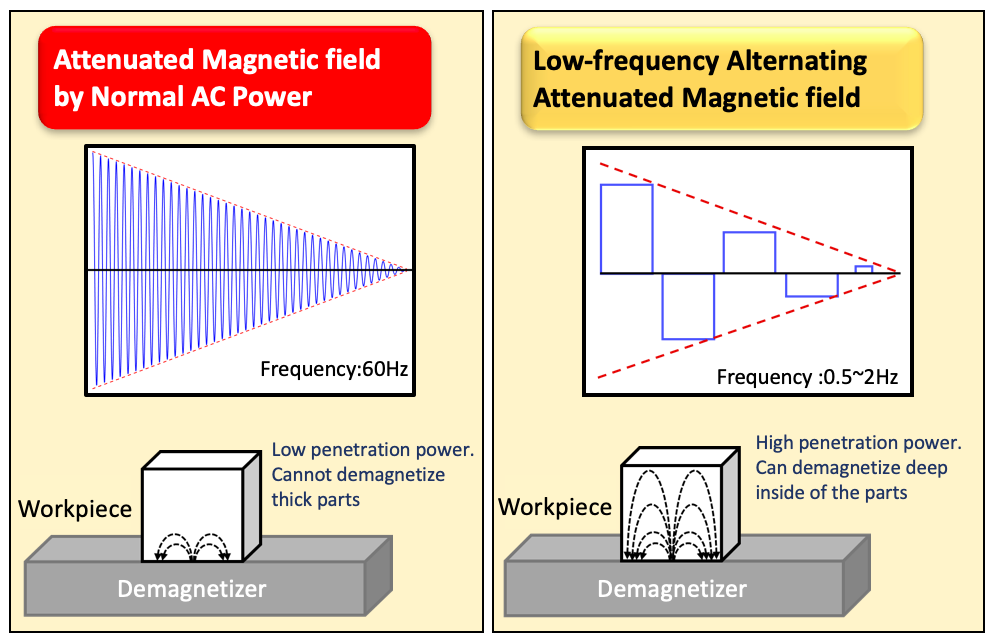 3. Optimized design according to the geometric characteristics of the workpiece:

The static demagnetizing machine optimizes the arrangement of the coil and the demagnetizing field waveform according to the geometric characteristics of the workpiece. Specifically, we have developed three models for rod-shape, plate, and ring-shaped workpieces.

Suitable for long workpieces with a length of more than 300 mm and a diameter of less than 120 mm, such as steel rods, steel tubes, spindles, slide rails, etc.

Suitable for plate workpieces with a length and width of more than 150 mm, especially suitable for molds.

Suitable for ring-shaped workpieces with a diameter from 150mm, such as steel pipes, connecting rings, etc.